skip to main | skip to sidebar

Videographer Liza de Guia is working on a series of mini-docs about local food artisans and the project is turning into her own online version of the food network. I watched her two part series on Matthew Tilden's SCRATCHbread and was completely floored.  I love it when people are passionate about food but I have to say I had never heard anybody use the word "sexy" to refer to a lump of dough. Tilden's intensity is fascinating and just a little bit unsettling. This video will make you look at breadmaking in a whole new light.


SCRATCHbread: A Brooklyn Chef Creates Food from Scratch to Start A Movement from SkeeterNYC

The second part of the SCRATCHbread mini-doc features chef Juventino Avila of get Fresh Table &  Market, one of my favorite restaurants in Park Slope. As you watching Avila preparing chai French toast made with SCRATCHbread, creme anglaise, lemongrass, anise, green cardamom and cinnamon (not to mention the chocolate nibs that are baked into the bread!) you start to notice a similar level of intensity. Here also, food is considered a living being and gets treated with respect.

Thanks to our friends at Brooklyn Based for this really cool tip.

Posted by Sylvie Myerson at 1:45 PM No comments: 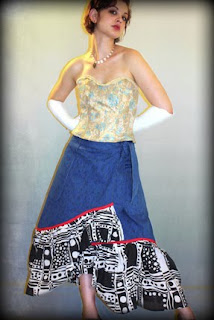 "My aim is to make and find unique items." Stop by Sylvia Holden's brand new online boutique and you'll see that's the case. Her designs merge the fluidity of Bohemian chic with modern deconstruction and a healthy dose of swashbuckling energy. She'll encourage you to make bold fashion moves such as mixing gold and silver jewelry or layering a bustier with a turtleneck. The boutique showcases her handmade, limited edition clothing and accessories as well as some vintage designer pieces but, she likes to stress, it’s really about “selling a concept of style." 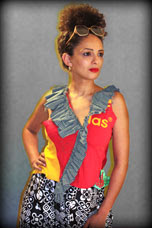 The magnetic quality of Sylvia’s design comes from its contrasting qualities: “I like to make things pretty and then juxtapose it with something tough. Like soft and hard. My integrity tote is a good example of this approach: pretty words and gold trim sandwiched in vinyl. Or styling a pretty silk blouse with a large tough leather cuff, an old piece with a new piece…” Along those lines, I particularly love the contrast between the romantic quality of her princess t and her black and white split skirt. 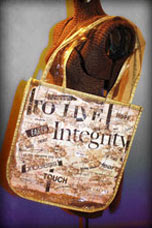 As far as surviving the recession, Sylvia’s advice to broke fashionistas is to “mix vintage with cool indie designer. It’s inexpensive, it’s recycling, it supports small American designers and it looks really sharp.” 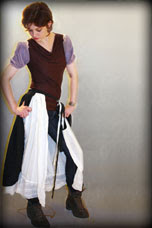 Sylvia Holden’s designs can be found online at http://www.sylviaholden.com and at the Brooklyn Indie Market.

Posted by Sylvie Myerson at 9:52 AM No comments:

Steampunk author and fashion critic G. D. Falksen was kind enough to chat with me about what is happening style-wise in this alternate universe. Falksen will be the judge of the fashion contest held at The Way Station on Saturday October 24th, in celebration of Brooklyn Indie Market's Steampunk Day (Yes, that's him in the picture.). 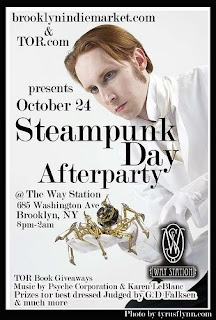 Steampunk has been around for a while as a cult literary phenomenon. More recently, it seems to have exploded as a full-fledged fashion and design movement. How do you explain this?
The rise of steampunk fashion and the steampunk subculture are largely the result of the Internet.  Web communities like Steamfashion allowed people interested in steampunk styles to communicate and, perhaps more importantly, to exchange pictures.  In person meet-ups like the Time Travel Picnic gave people the excuse to dress up, and word about these gatherings was facilitated by the aforementioned Internet communities.  Essentially, localized interest in steampunk fiction and Victorian fashion was given a means of easy mass-communication, which then allowed them to expand and develop far faster and more successfully than if they had been left on their own.  The subculture was also aided by a larger neo-vintage movement in fashion, which made it easier for steampunk enthusiasts to find Victorian and Edwardian style clothing.

How do you define steampunk esthetics?
Steampunk draws very strongly on Victorian concepts and ideals, but these come in a number of different forms.  On the one hand, there is a very strong emphasis on things looking good.  19th century clothing is based around the idea that it should be fitted to the wearer, not the wearer fitted to it; Victorian clothes can comfortably fit and flatter virtually any body type, whereas most modern fashions are built exclusively around tall and thin women and broad-shouldered men.  Machinery was often designed to be ornamented or attractive in addition to being useful.  Contrast this to modern technology, which is the victim of its own attempt to look sleek, clean and ultra-modern: it ends up looking dull and lifeless.  Steampunk also draws upon the idea that things should last, and it supports the Victorian idea of clothes and possessions remaining usable from one generation to another, in contrast to the modern policy of planned obsolescence within a few years at most.

Steampunk reveres the machine as a work of art but seems to also rely on traditional craft techniques. What is the importance of the hand-made?
In steampunk, quality craftsmanship is a fundamental concept.  In contrast to the “amateur hobbyist” of the mid and late 20th century, steampunk enthusiasts don’t feel the need to make everything themselves if the necessary knowledge is outside of their expertise.  Instead, they are strong supporters of the professional craftsman who takes the time and effort to learn a craft or skill (whether tailoring, cobbling, machine construction, jewelry-making, etc).  Steampunk strongly supports the purchasing of well-crafted goods from professionals and small business that are attempting to support themselves with their profession, in much the same way that local craftsmen from tailors to woodworkers were supported in the 19th century.  At the same time, steampunk fans are often very resourceful, and if necessary goods cannot be obtained from professionals then they can find them elsewhere, in all manner of places ranging from thrift stores, surplus shops and even mainstream stores.  However, supporting craftsmen and small businesses remains very important in steampunk. 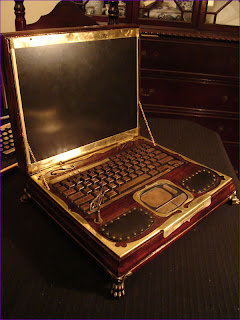 
Can you tell me about your wardrobe?
My wardrobe is extremely varied, both in terms of style and source.  Some of my favorite clothes are tailored (I have a wonderful frock coat by Kit Stølen and a three-piece suit from a small tailor), and this is often a necessity given my rather extremely tall and thin shape.  Other clothes have been scrounged as necessary.  I have several coats from thrift stores, a military coat from an old theater company, gaiters and motorcyclist pants from an army surplus store, and shirts and ties from wherever I can find them. Being a “starving artist” who’s surviving the bohemian lifestyle, I can safely say that steampunk can be adapted to just about any income.

We've mentioned books and clothes, but what other kinds of things are people making?
Naturally, I’m inclined to reference steampunk writing again out of professional pride, but really the sky is the limit in terms of what is out there.  After clothing, Datamancer computer mods are probably the most famous (and with good reason: his working steampunk laptop is incredibly beautiful).  In addition there are all manner of accessories people are making, from mock-weapons to mechanical toys to accessories like wings.  It’s also very important to remember steampunk art, which is often a bridge between steampunk literature and fashion.  What the authors write about the artists give a very real visual embodiment to, and this in turn helps to guide and inspire artisans and designers.  Writing, art and craftwork are a sort of creative triumvirate in steampunk.
Posted by Sylvie Myerson at 8:41 PM No comments: 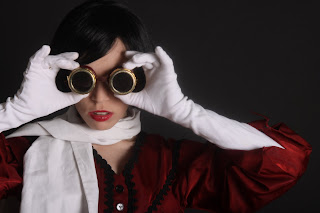 Lace up your corset and grab your aviator goggles, Steampunk II is landing at the Brooklyn Indie Market on Saturday October 24th! (Don't miss the after event party at the The Way Station, Brooklyn's first steampunk bar.) 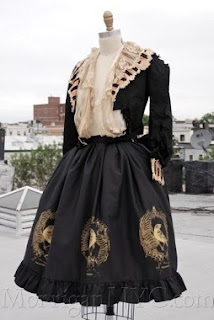 Steampunk has been around as retro futuristic sci-fi for years but has been receiving a lot of media attention of late due to the emergence of indie designers who are bringing these virtual worlds into the here and now. The New York Times Magazine devoted an extensive article to the movement last spring and mainstream designers such as Alexander McQueen and Ralph Lauren are putting out neo-Victorian/Edwardian fashion lines.


Steampunk style combines Victorian elegance with mechanical parts of the same era (think fine tailoring plus grommets), adds a shot of Jules Verne then throws the lot into a 21st century blender. The emphasis is on traditional craftsmanship and formal wear with a sexy DIY attitude.  Nothing here is generic or casual.

Among local designers present at the market, Berit New York is of particular interest as one of the most prominent steampunk-themed designers, often with a swashbuckling flair. Also noteworthy are Morrigan NYC's gorgeous victoriana, gothic and Lolita inspired designs and Interesting Particulars' sacred science lamps and biomorphic felt adornments.

Sylvie Myerson
Brooklyn, NY
Sylvie Myerson is a French-American writer living in Park Slope with her husbsnd, Vid Jain and their two kids (a boy and a girl). Sylvie was founding editor of Sandbox Magazine, a trans-media publication which documented the NYC performance/installation art scene of the mid 90's. She is a total klutz and really respects people who make things by hand.